Vrije Academie has officially settled in het Cromhouthuis, a monumental canal house on the Herengracht in Amsterdam! Every month, we provide an interesting lunch lecture in English. We offer various topics: from art history, to fashion, photography, architecture, and philosophy: all will be included! The lectures take place in the beautiful Jacob de Witzaal and can be booked as seperate classes. When will you visit? Pick your favorite topic from the following dates:

April 26 - Arianne Deligianis: Florence: home of the Renaissance About Florence, a wealthy and critical republic that grew to be the most important city of the 15th century in Europe by using trade, industry and money transfer. Get to know the greatest artists who have ever lived and worked here, such as Michelangelo, Leonardo Da Vinci and Giotto.

May 24 - Mariska Doesburg: Van Gogh & his olive groves Together for the first time: the fifteen paintings that Vincent van Gogh made of olive groves in the south of France. In the lecture you will hear about the meaning the olive tree had for Van Gogh and what purpose he had in mind when he was painting this unique series.

June 21 - Arianne Deligianis: The language of flowers For centuries, people have been using flowers to relay a certain message. Even in art, flowers played a crucial role and had specific symbolic meanings that enriched a story. Travel through different centuries and art historical styles and learn about the secret language of flowers in art. During this lecture you will see work from many famous artists like for example Jan van Eyck, Sandro Botticelli, Dante Gabriel Rossetti and Georgia O' Keefe.

We also provide a weekly lunch lecture in Dutch on Thursdays. 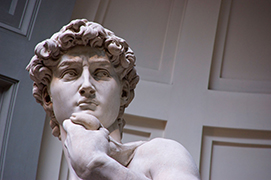